The story behind the Polaris RANGER®

The story behind the Polaris RANGER® 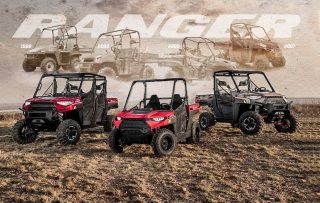 It’s been two decades since the RANGER® 6×6 vehicle was introduced and revolutionised the side-by-side category in 1998. Mitchell Johnson, son of David Johnson – one of the founders of Polaris in the 1950s – was pivotal to the conception of the iconic machine and tells us more about how the RANGER® rode to market…

“When discussing the beginning of the RANGER®, we first have to think about the vehicle in the context of what Polaris was doing at that time. In the 1990s, the Sportsman ATVs were Polaris’ only Off-Road Vehicle and was selling well.”

Polaris’ reputation for being one of the fastest developing companies in the powersport industry held true, RANGER® went from initial development to production line in just two years.

“We had talked from time-to-time about making a side by side ATV for a driver and passenger. Every Friday we had a staff meeting in the morning and then in the afternoon, we’d go out and ride ORVs. We always took at least one 6×6 ATV to carry everything. We would try and ride around with one person sitting on each fender to see what it was like. One day, Edgar Hetteen [one of our founders] came to my office and said we should make a 6×6 in a side-by-side configuration, he loved the machine but wanted to ride beside his wife Hannah.”

Major decisions about the new model were all made as ‘gut calls’.

“Edgar mocked up side-by-side seating on a 6×6 in his workshop, we spent an hour or so sitting in it to see what it was like – should it have handlebars or a steering wheel? Should it be ride-on or ride-in? These are all things that are gut calls and we made using our experience. With brand new products like the RANGER®, you never know if you’re going to hit the bullseye with customers – the customers themselves don’t envision how the product will or can be used. Take the microwave for example, it hasn’t replaced the oven like the developers thought it would, but has instead created a new market.”

The key in developing the RANGER® in Mitchell’s opinion was to keep the team and investment small.

“I’m not sitting here saying that we knew it was going to be a success but we knew we had to get something out there. If we had identified a need, then we needed to find out. I worked with Edgar, Chuck Baxter – who was the VP of engineering – and James Bergman at BEAMCO in Alvardo, MN, to see if he would do the initial concept work. The idea was to keep investment small, so that if we didn’t hit the bulls eye, we could adjust the sights easily to get on closer to the target centre.”

During early conversations, the main characteristics that the new machine had to have were fairly clear.

“Good speed, great ride and handling with excellent off-road capability, plus a greater payload than any of the utility haulers on the market were all attributes we wanted the vehicle to have. Most of all, it had to be a lot of fun to drive and ride like the already popular Sportsman line.”

“The initial prototype was received well by management. And the first production made a small profit in the first year. We also achieved ‘off-road’ status for the vehicle – which was essential.”

The RANGER® is testament to the Polaris culture – innovation and development, moving with the times and trusting staff to make decisions. Even the name of the new model was helped decided by employees.

“We’d been playing around with names. One of the early Polaris products was a RANGER® snowmobile, when this model was discontinued, so was the name – which I always thought was a shame and I wanted to bring it back. We went out to the employees to ask them to think of a name and said we’d give $100 if their name was chosen. Mike Trihey and Donny Whiteman submitted RANGER® name and were given $100 each.

“The RANGER® name represents the category – it’s fun to ride and that’s one of the most important elements for us. That’s the history of Polaris throughout the years, people realise how much fun they are to ride and the volume grows, plus the RANGER® does a lot of work.

“The RANGER® was a team effort. This stuff doesn’t happen without the people on the team – contributing, listening and pushing, we don’t know for sure what is wrong or right – that’s what has made this successful. The culture at Polaris is one full of passion and an overwhelming desire for the products and people to succeed.”

Polaris celebrated rolling the one-millionth RANGER® machine off the production line in 2017 and 2018 marks two decades since the utility vehicle was introduced to the Polaris line-up. Forming a key part of the Polaris product line, the RANGER® is used all over the globe for a variety of tasks – with the RANGER® Diesel and RANGER® 570 variants being international best sellers.

The RANGER® legacy gets stronger every year, with the RANGER® XP 1000, the latest addition 2018, setting a new industry standard and boasting over one hundred user-inspired improvements. The model has class-leading power (82hp) and torque (61lb-ft), industry-leading towing (over 1100 Kg) and ground clearance (330mm) – making it the hardest working, smoothest riding SXS built.