The SSV Dakar Experience: An interview with Wayne and Kristen Matlock 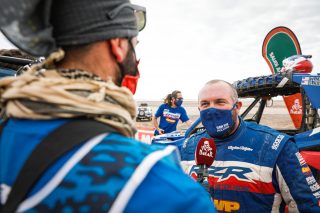 The Polaris RZR Factory Racing team took on the Dakar Rally for the first time this year, with BAJA champions and husband and wife duo, Wayne and Kristen Matlock.

In their Dakar debut, the Matlocks competed in the SSV class with the all-new 2021 Polaris RZR Pro XP. After covering 7,646 kilometres of the world’s toughest race, both crews successfully reached Jeddah on 15th January, obtaining one of the greatest rally achievements; completing the Dakar Rally.

With more than 20 years of professional racing experience, Wayne Matlock is a 10-time UTV BAJA Champion across BAJA 1000, BAJA 500 and San Felipe 250 races, and Kristen started racing UTVs professionally just five years ago and is now a seven-time BAJA Champion.

One month after returning from their epic challenge, Wayne and Kristen talk about their first Dakar experience…

“My first Dakar experience was everything I thought it would be; an adventure from start to finish,” said Wayne. “It was the kind of adventure that makes you ask yourself ‘why am I doing this?’, then one hour later you find yourself in awe staring off into the most incredible landscape you have ever seen.”

“Not only were the drivers/co-drivers rookies, but it was Polaris RZR USA’s first year too,” said Kristen. “We all had a lot to learn in a short period of time and most of it just couldn’t be learned on the internet or via phone chats; we had to wait to get there in order to gain the knowledge we needed first-hand. Before we arrived, we built competitive vehicles, packed the right tools and spare parts, and formed a strong team. I’d give ourselves an A+ for all of that. Of course, this year was crucial for getting a better understanding of the vehicle performance in those conditions, our own preparation and how to come back even better.”

For many, taking part in Dakar is more than just a race, it is a lifelong goal.

“For Wayne, it’s been his dream since he was a boy watching it on TV with his dad. I put a few races on my bucket list when I started my professional UTV racing career, and the Dakar was at the tip-top,” said Kristen. “Never in a million years did I think I would find myself actually racing it someday.”

Seasoned racers in Baja and the United States, the Matlocks had a wealth of experience behind them to take on the Dakar, but there were still challenges along the way.

“The races in the US and Baja are totally different to Dakar, despite them all being long-distance endurance races,” said Wayne. “Baja is extremely rough and beats you up. Dakar can be much smoother but it goes on for 12 days; it’s much more of a mental chess game where you have to think days ahead, not just hours.”

For both Wayne and Kristen, this was their first time visiting the Middle East.

“It was my first time in Saudi Arabia, and it showed me just how welcoming they are,” said Kristen. “There were lots of spectators and they were cheering us on throughout the entire rally. I loved seeing the kids’ faces light up when we would give them a wave as we raced by, and the little girls that were so excited to take a photo with me. It was one of the big highlights of the trip for me!”

What do they love most about racing?

“For me, racing is something I think about from the time I wake up to the time I go to bed, then I dream about it,” said Wayne. “I would say the thing I love about racing is the competition. But it really has brought me so much in life. I have had a lifetime full of adventures, met some of the best people, and the best part is we get to do it as a family.”

“Being successful in a male-dominated sport is really empowering for me,” said Kritsten. “I love that I can encourage other women to get out there, defeat the odds and chase their dreams too.”

Being husband and wife, they were able to fully experience the highs and lows of Dakar together.

Wayne said: “It was something that is hard to explain. It was amazing to have my wife with me as a teammate. We could share our experiences every night with each other. We also shared the heartaches with one another and that helped get us through the mental game of Dakar.”

Will the duo take on the Dakar Rally again?

“Our remaining races this year include the SCORE Baja Series – San Felipe 250, Baja 500, Baja 400, Baja 1000 – which is a peninsula run or point-to-point race this year, as well as the Sonora Rally that will act as a training for Dakar 2022.” Kristen continued, “With that being said, we are planning on returning to Dakar in 2022 with Factory Polaris RZR. We are pumped to apply all of our knowledge gained from this year and come back stronger than before!”

One word to sum up their Dakar experience?

Following the knowledge acquired at the Dakar Rally, Polaris and the RZR Factory Racing team are poised to continue innovating and raising the bar of performance race vehicles. The current RZR Pro XP platform has been developed through extensive hours of research, development and testing in real-life race scenarios like this, and its success is proven; winning the UTV World Championships, Baja 1000, Baja 500 and many more last year alone.

The vehicle used for Dakar was built from as many stock parts as possible to prove its durability and performance capabilities when competing against the toughest competition in the world, including the Pro Star engine, intercooler, turbo, transmission, hubs, and brake callipers.