The road to Dakar: Xtremeplus heads to Dakar 2023 with the Polaris RZR Pro R

The road to Dakar: Xtremeplus heads to Dakar 2023 with the Polaris RZR Pro R 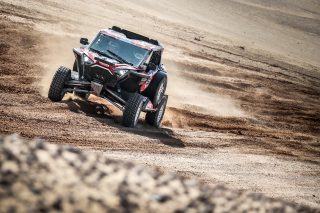 The FIA-FIM World Rally-Raid Championship will officially start in less than one month with the Dakar Rally 2023, and the Xtremeplus team are gearing up to take on the challenge in the all-new Polaris RZR Pro R, along with six international teams.

The 45th edition of the Dakar Rally is set to be held in Saudi Arabia – the fourth time that the country has hosted the event – and will take place between 31 December 2022 and 15 January 2023. With 14 stages taking pilots from the beaches of the Red Sea to the sands of the Arabian Gulf, Saudi Arabia offers the teams a truly unique and intense challenge. Pair that with the Polaris RZR Pro R’s powerful four-cylinder engine, new frame and reinforced parts, as well as six highly motivated crews, and the Xtremeplus team have the winning formula for 2023.

The Polaris RZR Pro R has been developed to be the most powerful, most robust, and most advanced side-by-side built by Polaris to date. Featuring a naturally aspirated 2.0L, four-cylinder engine that puts out 225 horsepower as standard, the Xtremeplus team will equip a 26mm restrictor that will reduce the power to 170 horsepower to comply with the FIA regulations for the T4 category at Dakar.

To be ready for the world’s most demanding race, some modifications from a stock machine to a competitive, Dakar-ready vehicle were necessary, including a new frame to install all the compulsory FIA security components, electronic, powertrain and drivetrain tuning as well as new CST 32-inch Apache tyres. The team also installed suspension dampers made by Donerre specifically for the Xtremeplus team and the Pro R, giving the vehicles extra suspension travel to overcome the extreme obstacles and challenging terrain that the Dakar is guaranteed to throw their way.

“We are ready for the new challenge. We are delighted to join the 2023 Dakar Rally with the new Polaris Pro R that  – even with a restrictor – is extremely competitive,” said Marco Piana, Xtremeplus Team Owner.  “With the new Pro R, we’ve got a not-so-secret weapon that will catapult us into the upcoming Dakar race, and we can’t wait to see what our teams can do.”

The Xtremeplus team arrives at the 2023 Dakar Rally following a 2022 racing season full of successes. Whilst the FIA calendar faced some cancellations and changes that impacted the number of races that the team could participate in, the races that the team did attend brought positive results. The team achieved 2nd and 4th place in the T4 category at the Abu Dhabi Desert Challenge, as well as attending the Rallye du Maroc, the Fenix Rallye Tunisia and the Tunisia Desert Challenge. The team also witnessed the first race for Polish rookie Alex Szukowsky who, at just 18 years old, finished on the podium (P3) in the T4 category at the Moroccan Baja. To finish with style, the Xtremeplus team achieved 7th in the overall car category at the Africa Eco Race in October, with pilot Eric Schiano winning one stage in the car classification with the Polaris RZR Pro XP.

“The highlight of our 2022 season was the second position in the T4 category in the European Baja Championship, scored by an all-women team of Lina van der Mars and Giulia Maroni,” continued Marco Piana. “We didn’t have many races in 2022, but it brought us a lot of satisfaction after testing with the RZR Pro XP and seeing great results. This has proved to be a huge motivator for next year – the feeling of triumph is highly addictive so let’s carry that enthusiasm and motivation into the 2023 season!”

Acting as assistance teams this year will be Marco Piana (France) and co-pilot Nicolas Garnier (France) with a T1 Toyota, and David Giovannetti (Italy) and co-pilot Renato Delmastro (Argentina) with a T5 Camion Man.