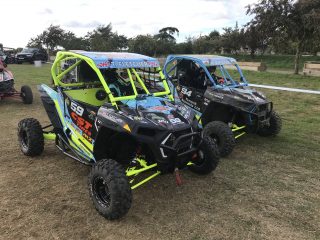 Last weekend saw a welcome return to racing, with the opening round of the 2020 British SXS Championship at Champs Park, Kettering.

After being delayed for several months due to COVID-19, Champs Park welcomed 46 participants and their SXS machines for a long-awaited weekend of adrenaline and excitement. This was the first round for both the Polaris SXS British Youth Championship –  specifically aimed at young riders as an introduction to competitive motorsport, and the Polaris British Short Circuit Championship – the UK’s premier racing championship for all makes and models of SXS.

“The opening round of SXS Racing couldn’t have gone any better,” said Colin Martin, Race Director of SXS Racing. “To be honest, we were against it with the weather from the get-go. The extreme heat meant we were battling dust throughout the weekend which makes it much more difficult for the competitors, but it made for some excellent racing! Every race was respectable and competitive, just how we like it, and we left the weekend on a real high. Looking forward to some more racing action for the latter part of this year.”

Saturday was race day for the Youth Championship riders, and a total of 11 lined up with their Polaris Ace 570 machines. Leading the overall results in the Youth Expert class was Mack Priestwood who won all three races, followed by Joe Chilvers in second and Fred Tarrant in third. In the Youth Rookies class, Jack Barker won overall, with Sophie Bird and his sister Jessica Barker claiming the second and third spot on the podium.

With any brand able to take part in the SXS Racing Championships, Sunday brought a heap of action from all 35 senior SXS racers across the board, and an excellent start to the season for Polaris, with the U.S brand claiming the top spot on the podium across all four classes.

The Open Class Rookies race saw a huge achievement by Lewis Scotney and Rio Longdon in their RZR 1000 machines, both newcomers to the senior classes after a show of incredible performance and ability in the Youth Championship over the past two seasons. Lewis claimed the top spot of the podium ahead of his dad, Mark Scotney in 2nd, with Rio Longdon completing the podium in third place.

The new RZR Pro XP model took the Experts Open Class by storm last weekend, with all three podium finishers competing with the new Polaris model. Mark McCann won the race, followed by Paul Severn in second and Adrian and Callum Loveridge in third place. In the 1000cc Experts race, Mark McCann claimed first place again in his RS1 1000, with Tom Fletcher in a RZR 1000 in the second spot, followed by Chris McPhee. Meanwhile in the 1000cc Rookies race, Ross McNair won in his Polaris RS1, with Chris Place and RZR-rider Ricky Flint following behind in second and third.

Richard Coleby, Polaris Britain Sales Manager, said: “As sponsors of the British SXS Championship, we’re so excited to have racing events back in our calendars and to reopen this opportunity for our sport and leisure customers. Last weekend was an excellent start for the season and it’s great to see the new Pro XP has made it to the track for the first time in the UK and has claimed it’s first win already! A big congratulations to the organisers for getting this championship up and running again throughout the unprecedented circumstances this year has brought.”

The opening round at Champs Park has been a great start to the 2020 SXS racing calendar and a special thank you to the organisers and all the teams that took part.

The next round of the series is set to take place on 12th – 13th September with the venue to be confirmed.

For further media information on Polaris ORV products, please contact the Polaris ORV Media Office on +44 (0) 1525 270100 or email us at press@polaris-orv.media.