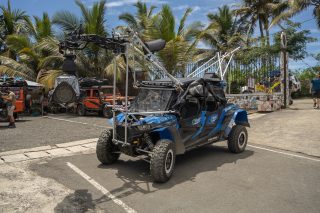 Amazon Prime Video’s The Grand Tour, hosted by Jeremy Clarkson, Richard Hammond and James May, is one of the most popular motoring TV shows worldwide. Broadcasted throughout more than 240 territories worldwide, this series of specials sees the team take on expeditions across some of the most remote and exotic parts of the world.

Launched on 18th December, the latest episode titled ‘The Grand Tour: A Massive Hunt’- is the long-awaited addition to the fourth season available to watch exclusively on Amazon Prime Video. Featuring some of the roughest roads imaginable on the island of Madagascar, The Grand Tour production team chose the Polaris RZR to assist behind the scenes to overcome the challenging conditions experienced along the way.

The episode follows Jeremy Clarkson, Richard Hammond and James May as they search for real pirate treasure that remains the most sought after in the world. Their journey starts off on the island of Reunion; a French outpost in the Indian Ocean, showcasing its impressive infrastructure, then leading on to the neighbouring African island of Madagascar, known for its unique wildlife, diverse terrain and breathtaking landscapes. The Grand Tour team are led to take the Route Nationale 5, a 240-kilometre stretch of road that runs alongside the Indian Ocean, which is arguably one of the most dangerous roads in the world. The road has distinctive sections, each with its own set of difficulties, from swamp-like conditions to deep sand, river crossings and sections of sheer rock combined with slippery red clay and steep gradients to circumnavigate.

Filming for the latest episode took place in Madagascar in November 2019. To navigate the demanding and unnerving route, the Grand Tour team needed a vehicle they could trust in case they found themselves in a dangerous situation. It also needed to manage the huge obstacles with ease so they could safely transport the delicate camera equipment from A to B, and the RZR XP 4 1000 did just that with the additional seat space to fit crew members too.

“With its combination of mud, rocks, sand, steep gradients and continual flooding, the RN5 is the most challenging road I’ve ever driven on,” said Phil Churchward, Series Director of The Grand Tour. “What’s more, as well as being unbelievably bumpy, it’s also very narrow in sections with little room for mistake.  So, all in all, not the easiest place to film a TV show.  Quickly realising that a normal 4X4 wouldn’t work – no matter how trick the suspension – we chose the Polaris RZR.  Not only did it ride the bumps, climb any gradient, and wade through constant flooded areas, it was incredibly easy to use as a camera platform – and we had over £200,000 of stabilised camera equipment rigged to it.  Importantly, we never had to worry whether it would make it to the location each day.”

Customised with a poly roof, windscreen, LED light bars and secure cargo boxes, the RZR offered a unique vehicle that the team could depend upon. The Polaris distributor in Madagascar, CT Motors, prepared the vehicle with all additional parts and modifications to ensure it was ready to take on the difficult route – including the addition of larger 15-inch tyres and a spare, just in case. Fully prepared and tested at CT Motors based in Antananarivo, Madagascar, the unit was then transported for 8 hours across to Toamasina, the start of the RN5 route.

The Grand Tour: A Massive Hunt is available to watch now on Amazon Prime Video.