Polaris continues support of the British SXS Championship for 2022 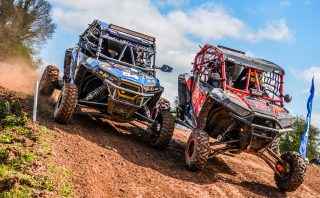 For the 11th consecutive year, Polaris UK is proud to announce that it will once again be supporting the British SXS Championship for the 2022 season.

The Polaris British SXS Championship series has played a significant role in growing the side-by-side racing scene in the UK since its inception in 2011, becoming the leading championship for all makes and models of SXS across the country. This includes the latest vehicles within the Polaris RZR line-up, with the developments pushing the championship even further with more aggressive torque, impressive suspension and quick-off-the-line acceleration.

“We’re really excited to be going into the 2022 season for another year of great racing alongside Polaris,” said Colin Martin, British SXS Championship Clerk of the Course. “2021 was an incredibly successful year and 2022 is set to be even better with exciting new race venues, strong attendance and big names moving around the vehicle classes to make for some fierce competition and gripping racing. I’m looking forward to seeing new and familiar faces around the paddock again this year and seeing all the action that every round is sure to bring – can’t wait!”

The British SXS Championship is expecting its highest ever attendance and competitor numbers across all categories, including expert, rookie and youth classes. Originally starting with just one day of racing at every round, the championship now involves eight rounds of full weekend-long events across some of the best off-road tracks in the UK.

“The championship is huge for the sport and leisure side of our business; it not only raises the awareness of what our machines are capable of, but it’s instrumental in creating more opportunity for our growing RZR community here in the UK,” said Richard Coleby, National Sales Manager of Polaris UK and Ireland. “We’re proud to be continuing our support of the championship for 2022 and we’re looking forward to yet another year of fantastic racing.”

SXS Racing runs two main championships; the Polaris British Championship with two classes, a 1000 class for side-by-sides up to 1000cc, and an open class for all modified and turbo-charged machines. The Polaris RZR continued to dominate the British SXS Championship leaderboards last year with the RZR XP 1000, RZR Turbo, RZR RS1 and new RZR Pro XP, and it won’t be long until the newly-announced RZR Pro R and RZR Turbo R reach the tracks for even more competition.  In addition to the senior classes, there’s the Polaris British Youth Championship aimed at young riders who want to explore the world of racing and are too young to compete in the senior championship.

The 2022 British SXS Championship – both youth and senior series – will take place over eight rounds, kickstarting in April with venues to be announced:

Please note, all dates are subject to change.