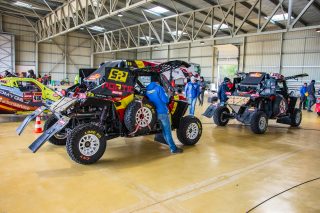 Once again, the Xtreme Plus Polaris Factory team is gearing up for the world’s most challenging off-road race; the Dakar Rally, set to take place for the first time in Saudi Arabia in 2020.

Since the very first rally from Paris to Dakar in 1979, the annual Dakar race remained in Africa for thirty years followed by a decade of historic races in South America, and now for 2020, the Dakar Rally heads into an entirely new landscape; the Middle East. Saudi Arabia welcomes the third chapter of the Dakar Rally; home to vast expanses of desert, a labyrinth of complicated tracks, and soon to host over 350 vehicles competing in the iconic event. Kicking off on 5th January next year, the Xtreme Plus crew will face twelve stages covering 7,500 kilometres, 5,000 of which belong to the special stages, concluding in Qiddiyah near the capital of Riyadh.

The Polaris Xtreme Plus team claimed the T3 title every year from 2012 to 2017, becoming the very first official Dakar SSV class winners in 2017 with the Polaris RZR XP 1000, and this year Polaris will enter the event once more with the experienced French-based team, this time with three specially prepared RZR XP Turbos. Having already left the port of Marseille, the race-ready Polaris RZRs have already begun their journey to the 42nd edition of the world’s toughest race.

Marco Piana, Xtreme Plus Team Manager, said: “Naturally, we are aiming to win the 2020 T3 title, but our ultimate goal for the Dakar is to master the dunes and navigational challenges to make it to the finish line in Qiddiyah. We’re well equipped for the intense environment in Saudi Arabia with the RZR XP Turbo behind each of our teams – a vehicle that’s been engineered for optimal balance with enhanced suspension, a strong drive system, and turbocharged power to tackle every challenge along the way.”

Meet the Xtreme Plus Polaris Factory team for 2020…

Graham Knight and David Watson are entering the Dakar Rally for the first time in 2020, but they are no strangers to the sport, having finished 4th in the Silk Way Rally this year.

2020 will be the second year that both Eric and Christian will compete in the Dakar. Having competed in the Merzouga Rally that takes place in Morocco every year since its inception, the two friends have a long history of rally-raid and are well prepared for what lies ahead in Saudi Arabia.

Xtreme Plus Team Manager Marco and co-pilot Willy Alcaraz will be competing in a Toyota Land Cruiser and finalise the Xtreme+ lineup, with the main objective being to support the rest of the Polaris team.

To make the dream of Dakar possible, the Xtreme Plus pilots and co-pilots have a strong team of mechanics, organisers and truck drivers behind them, with a total of five support vehicles available from bivouac to bivouac, in addition to the in-race fast assistance vehicle.

The RZRs are race-ready, the teams are prepared, and the Dakar awaits.